There are two lodges which can be hired which are both self-contained and sleep medium sized groups. They are mostly used for weekend and week events but can also be booked for day events such as training and meetings. 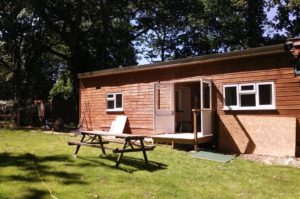 Manners Lodge is self-contained accommodation for up to 20 people with its own kitchen, toilets and a main room for eating, meeting and having fun. It is a new lodge built in 2017 on the site of the old lodge. Manners Lodge has welcomed Beaver sleepovers, cub pack holidays and winter scout camps. It’s also been base camp for large camps and events on the campsite.

Set amongst the trees, it is one of the prime locations on the site, being central to many of the facilities and overlooking fields to the east and woods to the west. It comes with its own outside space.

“I couldn’t believe the deer were so close to our windows, it was cool” – Beaver 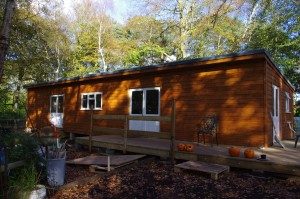 Built during 2014-15 in true scouting spirit by a team of volunteers except where experts were needed, this lodge is named for the trees surrounding it. The lodge sleeps 24 and has its own kitchen, main room and toilets. The shower block is just next door for hot showers. Set amongst trees and catching the sun on its decking, its all about getting back into nature. If you sleep in late, you can even watch the zip wire from your bunk!